Today we are releasing a new version of KDE Connect for Android phones and the Plasma desktop. This shiny new release includes some nice features contributed by great people in the KDE Community (and outside it). You guys are awesome!

The first feature I want to show you was contributed by Ahmed Ibrahim, and allows you to use your phone screen as a touchpad for your computer. Do you have a mediacenter or another setup where you don’t want to have a mouse and a keyboard always attached? With KDE Connect we will make you able to use your phone as a wireless input device!

And by the way, do you guess how I sent this screenshot from my phone to my laptop? Of course, I used the “Share to” feature and I sent it over KDE Connect :) In this new release, we made Android able to receive files as well, sent from a computer or another Android phone. You requested this feature for long, and finally here it is! You will be able to send files from Dolphin or from the also new command line interface, all thanks to Aleix Pol! 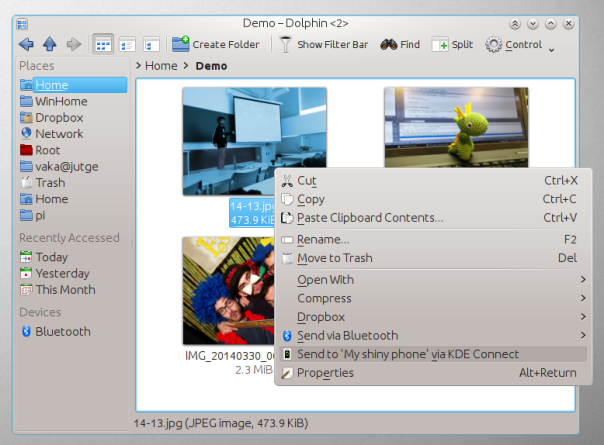 This version also has several improvements under the hood, has a bunch of bugs fixed and can now run on FreeBSD systems, thanks to Raphael Kubo.

To end this post I just want to thank, once again, everybody who sent patches and specially the awesome translation team of KDE, who made KDE Connect already available in 25 languages (including Catalan, my native tongue :)!

Edit 29/06/14: Please note that it might take a while for some distributions to release the new version. If you don’t want to compile it yourself, please be patient (and/or poke your distribution packagers until they update it).

Edit 01/07/14: A new minor version of both Android and Plasma been released today, fixing some problems found in the previous 0.7. The links above have been updated.